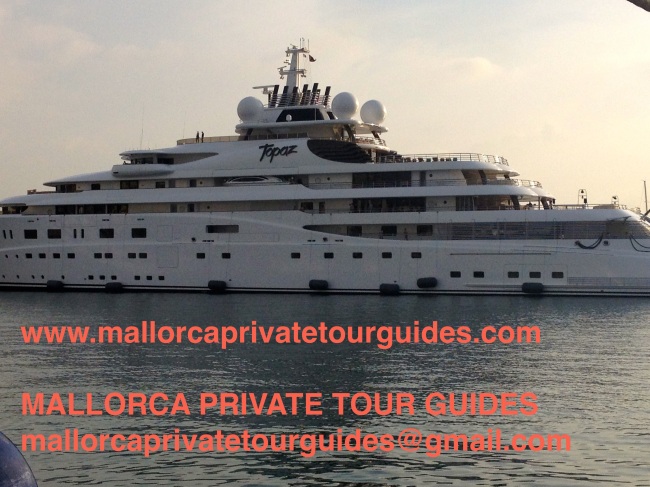 This morning everybody was surprised  by the arrival to the port of Palma of a giant of the seas, many of us thought it was a small  cruise ship coming into the port of Palma, but nothing is further from reality, it was the «Topaz» the fourth largest  private yacht on the world.

Every day more and more, Palma port is been consolidating as a destination, for the world´s  most prestigious yachts

on the island, the size  of «lady Moura» has always impressed us, but today  it seems to be an small ship docked next to the «Topaz»

The «Topaz» has become the 4th largest private yacht on the world with its 147 metres (482 ft) long, coinciding with the Prince Abdulaziz yacht (147 mtrs in length) owned by the Saudi royal family.

The “Topaz”  has been ordered by his owner to Lürssen shipyard in Bremen (Germany), founded in 1875, and it took 4 years to be ready. Finally the “Topaz” was launched in May 2012.

This mega yacht features a steel displacement hull, an aluminium superstructure styling  by  Tim Heywood´s studio and the interiors design  by Terence Disdate , the cost of the vessel is approximately 400 million pounds, or what is the same 461 million Euros or 527 million $ .

The Topaz carries 85 crew members on board to provide service to the owner and his guests.

Particularly striking is the large aft platform with a sun terrace and stairs to reach the sea, the vessel is carrying everything you need to enjoy water sports, jet skis , dinghies and even a mini submarine on board.

Sheikh Mansour bin Zayed Al Nahyan is the Deputy Prime Minister of the United Arab Emirates,minister of presidential affairs and a member of the royal family of Abu Dhabi, also owner of the Manchester City soccer team, he owns 33% of Virgin Galactic, which is organizing comercial suborbital flights  with a cost per fly ticket of 188.000 euros, in addition he is participating in numerous companies as Daimler.

Mansour bin Zayed Al Nahyan has been ranked by Forbes magazine as the 104th  fortune in the ranking of millionaires on the world.

Mallorca every day is more consolidated as one of the most important world’s ports frequented by large mega yachts.

Every day are more guests traveling aboard private yachts are requiring the guide services of Mallorca Private Tour Guides for their visits to Mallorca, from a personal shopper to a professional licensed tour guide.

If you are visit the island either aboard a private yacht or in a cruise or a hotel … do not hesitate to contact us, the guides of Mallorca Private Tour guides will design for you a customized  itinerary to discover Mallorca , no rush , enjoying every single corner of this Mediterranean paradise, geting involved with the majorcan culture and tasting its spectacular cuisine.

Let us be your guide,we can help you to find this idyllic places hidden on the island,  little tiny restaurants to enjoy a great meal or taste delicious tapas,spectacular venues or amazing private visits into museums and monuments or a great shopping day in exclusive boutiques….

Discover with Mallorca Private tour guides  the spectacular marinas where these mega yachts are docked.

Let us guide you and show you the beauties of this island, from the simplest excursion to more specialized visits, our tour guides are made available to guide you, nothing is impossible and most difficult challenges are our specialty.