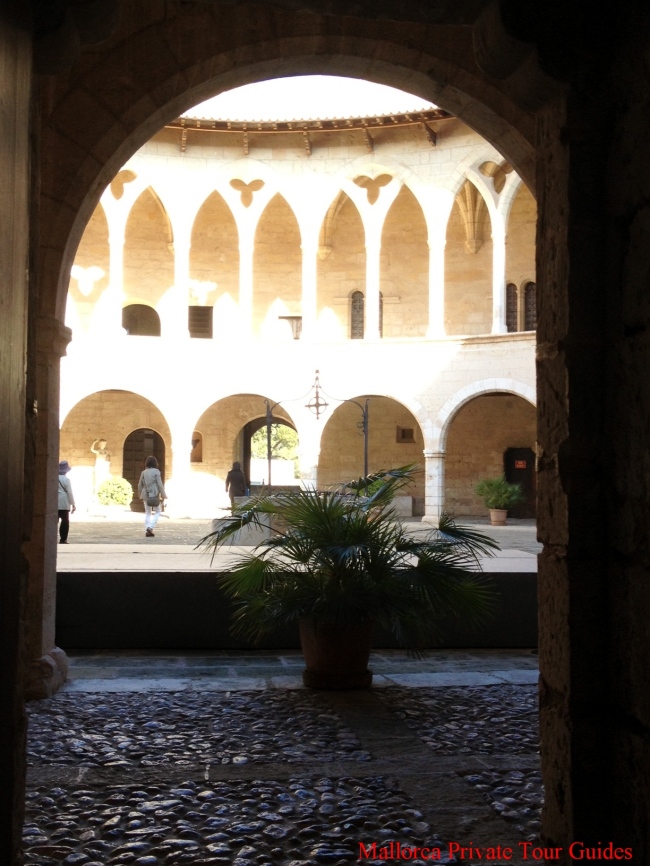 Sunday after Easter Sunday, in Palma de Mallorca, is celebrated the Angel Sunday  in Palma´s Bellver Castle, one of the most emblematic Gothic monuments of the city, which also offers spectacular views over Palma.

Angel Sunday is the day of Pancaritat in Palma, and this day is celebrated to honor the patron saint of Palma, which was the Guardian Angel (The  Almudaina Palace Angel ) until 1634 when it was changed to San Sebastian because the epidemic of bubonic plague that devastated the city of Palma.

The word PANCARITAT derives from the latin word  PANE CARITATIES – BREAD FOR CHARITY , which was held along time ago in the Temple Church in Palma, an ancient tradition where the juries of the city ,gave a bread for charity to poor families living in Palma.

There are many villages of the island celebrating their Pancaritats and each has its place in monasteries or hermitages, which are usually nearby.

Palma Traditionally used to be one of the last pancaritats in Mallorca, as is celebrated the Sunday after Easter Sunday.

The Pancaritats are traditionally celebrations where usually people gathered and eaten the last Panades or Empanades (Pies) that were made for Easter.

It seems that mallorcan panades –pies are closely linked with the Jewish cuisine, and more specifically, with the Jewish Passover (the Passover lamb or Pessah lamb ) where Jews traditionally eat a roasted lamb and unleavened bread «MATZOF» (because when the Jews fled Egypt they had no time for leavened bread dough) and to this meal are invited all the family members.

Passover is known by the name of Pessah which means transit or passage.

Passover coincides with the beginning of spring and lasts eight days (from 15 to 23 of Nisan or April) and it is not allowed the consumption of products which have leavened using yeast.

According to Jewish tradition, a lamb is eaten, should be eaten the entire lamb and nothing should be wasted, so this is probably  the origin of another traditional Easter recipe in Mallorca, also linked to Jewish culture, the FRITO DE PASCUA, eaten on the island on Easter Sunday and it is prepared with the visceras  (lung, liver, blood..), of lamb and herbs, recalling the bitter herbs «maror» which are also used in Jewish tradition, the bitterness suffered by the Jews during the Exodus from Egypt.

It seems that the first Jews elaborated this recipe using lamb the lamb visceras , onion, fennel and broad beans and after the discovery of America were Incorporated  ingredients like potato and  bell peppers.

But also in the Jewish Talmud, we find another recipe very similar to our pie or Mallorcan Panada the PASHIDA.

Its origins is linked to the Jewish heritage, seem to come from the medieval times where Sephardic Jews made PASHIDA or  a meat pie with a leavened dough usually served for the Sabbath.

But Sephardic Jews also made a variety of PASHIDA which is made with the remains of roast lamb for Easter Passover, and this PASHIDA or pie was eaten during the feast of Pessah Seder, which is the first full moon of the month of Nisan (which coincides with the seventh month of the Jewish calendar and the first month of liturgical calendar, it has 30 days beginning between 13 March and 11 April and that is where the Passover is celebrated, the most important holiday for Jews, not forget that in the primitive Judaism is one of the feasts of pilgrimage to Jerusalem and Jews kill a lamb to ensure prosperity).

And is this Seder PASHIDA appears to be the origin of our Mallorcan pie or Empanada, traditionally made with lamb, as a symbol of the sacrifice of Jesus for the sins of men.
We can not forget that when Saint John baptized Jesus called him, Agnus Dei in Latin, lamb of God who takes away the sin of the world.

In Mallorca our pies or empanadas are also filled with a little bit of sobrasada (typical mallorcan sausage) and this may be because the Mallorcan converted Jews called XUETAS, forced to convert to Catholicism, incorporate Sobrasada to their pies, which is pork meat, to demonstrate public rejection to Judaism.

And now the recipe for making the Mallorca pies or empanadas and the ingredients are:

For the filling:
– a  boneless leg of lamb, diced into squares
– 1 kg. shelled peas (can be frozen)
– Salt
– Red paprika
– Black pepper

The night before leave the meat to marinate with salt, pepper and red paprika. You can also use other meat such as beef, chicken or turkey.

To make the dough:

We will use a cup as a measure.

Heat water and for each oil cup or lard cup, add two cups of warm water.

Mix melted lard, oil and water and gradually add flour until obtaining a consistent and homogenous dough and let it rest.

We take a piece of dough, about the size of a small ball and using the thumb we will do a small little basket that later will fill with the marinated meat, peas if desired and a little bit of mallorcan sobrasada and pancetta.
With another small piece of dough and roll out thin and use it as cover for your pie, and we will close it by pinching and twisting the pie edges with your fingers.

We wll puncture the top with a fork so that when baked steam can escape and not burst.

And now your delicious empanadas are ready to taste it.

On behalf of the team of Mallorca Private Tour Guides hope you like our tasty Mallorcan Empanadas.

Let us guide you through the ancient Majorcan traditions and discover with Mallorca Private Tour Guides the origin of Mallorcan Empanades and the Jewish heritage in our culture and cuisine.

Join us for the Angel Sunday celebrations in Palma where you can enjoy a endless number of activities like folk dances, horses exhibitions, life music… in a unique setting, Bellver Castle, do not miss one of our tours to this impressive Gothic castle where the  guides of Mallorca PrivateTour Guides invite you to discover the history of this castle that was built for the kings of Majorca and was used as a military prison.