To find the origins of the early giants in Mallorca we would have to go back to the seventeenth century and to the village Soller where we found  the first giant in the procession of Corpus Christi.

To raise awareness of the biblical passages, the roman catholic church organized the «entremeses» (short theatrical performances) where are already involved the giants.

It seems that the first documented reference to the existence of giants appears in Cataluña,the year 1424 (solemnitats book of the city) and refers to King David and the Giant.

Chronologically the next giant in Mallorca that we know is in Sineu.  It Appears disconnected from the feast of Corpus Christi and is part of the celebrations of Sint Roc in 1653 and was made by the local artist Pere Antoni Real.

In the city of Palma, the giants  were appearing in the procession of Corpus Christi in 1734,after requesting permission from the Dean of the Cathedral to participate on it, finally ,the permit arrived on June 21st and the Palma´s  Giants may participate in the procession of Corpus Christi in Palma, and were allowed to enter  into the cathedral «La Seo» and they  were installed in the chapel of Our Lady of the Navigators, nowadays dedicated to St. Benedict.

In 1762 in Sant Llorenç (Mallorca) we find “Puput» ,the first Mallorcan giant that we know the name.

And so gradually the giants figures were proliferating across the whole island, Pollença, Manacor, Llucmajor …..

But the giants had to face the prohibitions imposed by the Council of Trento(1545-1563), the  decret of nueva planta by King Philip V (1716) and the Royal law issued by Charles III in1780 among many other local restrictions .

All these laws were clearly designed to limit and prohibit the participation of the giants in any folk event, “entremeses” or ecclesiastical procession. Because,specially the  roman Catholic Church in Spain considered that this representations had become farcical,burlesque and had lost its biblical sense.

Unfortunately because of this break between the Catholic Church and the tradition of the giants, many of these figures will disappear and will be the craft guilds, the ones who adopted the giants, eagles, dragons, horses … as their emblems.

But the  decree of Nueva Planta will impose  that “entremeses” and other properties of the craft guilds will become municipal property, so the giants will be in hands of the different municipalities on the island.

The law promulgated by king Carlos III will be another blow to the tradition of the giants, because it specifically prohibits the participation of the giants in any popular procession or demonstration, in this situation many figures will disappear or have to hide ,to avoid being destroyed and there were people, who even turned a deaf ear to the prohibition and remained using giants.

In Mallorca seems that giants have been protected by the Augustinians in the convent of Bon Socors.

The giants will reappear in Palma in 1814 during the festival of San Fernando (in honor of Ferdinand VII) and during the nineteenth century will be part of the stories writed by the Archiduke Ludwing Salvador of Austria in his book Die Balearen and also in this century will be the birth of other emblematic giants, the giants of Llucmajor, which were participating in the festivities of Santa Candida (1893).

In 1902 taked place in Barcelona the first giants encounter ,who joined  150,000 people  around the giants.

In 1904 the city of Palma Mallorca ordered to the ceramic Factory ”La Roqueta” two giants similar to those that today are exhibited in Cort.

There were two proposals, the first, made by the sculptor Miquel Vadells which was disregarded and the one which was accepted, was the one of “la Roqueta”.

The works were directed and coordinated by the owner of the factory, Pere Cetre, and there comes a giant and a giantess dressed as the peasants (payeses).

They were baptized with the names of Tofol and Beth-Maria and had certain peculiarities for that time, his eyes were moving and the giant smoked a pipe with smoke coming out continually.

The jewelry carrying by the giantess had been developed by the goldsmith from Palma, Paul Taronjí and were composed of set of buttons, lacing, a Cross of Malta.rings…..

But Tofol and Bet Maria(called by everybody Francina or Francinaina) had a tragic fate in 1936  they left Mallorca towards Barcelona to participate in the opening ceremony of the  popular Olympics, at the very momento when then Civil war breaks out and there  we were losing  their track forever, and never returned to Mallorca.

So  in1940 the municipality of Palma,requested  Sebastian Alcover  to build other  two giants similar to the missing, Tofol and Francinaina, but their destiny was not  better than their predecessors and were destroyed years later, by a wind gust when  they were exposed in the entrance of Cort and finally the vandalism of a group of young ended up leaving them unserviceable.

And the third will be time lucky in 1961, the City Council paid 35,000 pesetas to Monserrat Palmer and Joan Francesc Vives  Bellaflor for the actual Tofol and Francinaina, exposed in the lobby of Cort,  they are 4.20 mtrs tall and are made of wood, cardboard and wicker but they are too heavy to be carry so in 2005 the municipality invested 15000 euros and the workshop “Xicaranda” wil restored them and makes  the garments which they wear nowadays.

Mallorcan giants can be classified into five major groups:

–Couples of peasants, is the most numerous, and the oldest members  are the ones from Inca (Abdó i Maria), 1928,  to this group belongs Francinaina and Tofol from Palma (1961), 1983 the  peasant (payes) from Son Rapinya, in 1987 the ones from Sa Pobla (Antoni and Margalida), in 1989 the ones from Alcudia (Rampell and Pipella), Llucmajor (Miquel i Càndida), Sant Llorenç (Jaume Belluguins and Angelina Trevolina) 1996 the ones from Sóller (Antoni and Catherine ). In 1999 Palma ordered a couple procesional peasants (Tomeu and Margalida) to accompany  the giants xeremiers, in Selva 2002 (Pau and Rosa), in 2005 in Son Espanyolet (Gaietà and Catalina) and to all of these are joined two couples one from Felanitx and one from San Jordi and we don´t know either the name or  the date when they were made.

-In the second group  we would include the giants inspired in  characters coming from our rondalles or legends such as those of Llucmajor, ordered  in 1970 to Valencia, Pere Taleca and Fada Morgana and in 1971 the Amo de So Na Moixa i Na Joanota.

In 2000 the Magisterium Theatre Group in the  University (UIB) built several giant for the representation for the theatre play”l´amor de les tres taronges”. In 2002 from Puigpunyent the Bou and  Na Fatima, and finally from Palma, Banyeta Verda and Banyeta  Vermella (2004).

-The third group consists of traditional crafts representing each locality on the island, as the shoemakers from Inca (1994), in Capdepera ,Roc (fisherman) and n’Esperança (llatadora palm-craft) 2003 in 2005 from  Sineu (Maria Angels  figs harvester  and Marc, the blacksmith) and from Manacor de la Vall (Joan, coalmen and Llucia, embroider maker).

-The fourth group would be formed by historical characters,  from Llucmajor (Barba-rossa, 1970) from Calvia (King Jaume I and Violant of Hungary, 1999), in Alaro (Cabrit and Bassa, 2000) and from Palma on the Island Council of (Jaume II and Esclaramunda of Foix, made 2001, King Sancho I and Jaume III,  made 2002).

-In the last group all others, as the oldest processional couple from Mallorca: the ones from Manacor ,Vincenç (a Moor, 1942) and na Catalina (peasantgirl, 1933). The witch  Taven from Llucmajor (1970), xeremiers from Palma (1973), the pair of Petra, 1980 or the figure of a young  from Son Cladera (1983). From 2002 is the demon giant belonging to Factoria de So from Santa Maria and Sa Siurella from Marratxí. In 2004 xeremiers from Muro (Toni and Joan) and Na Comas and En  Comaro from Son Sardina, or Cosmet 2005, as Toni (artisan) i na Maria Angels (culture) of Pollença.

A total of 74 giant figures that we have today in Mallorca, with its  grandiosity (never better said) and spectacular beauty.

Today giants are an important part of our folklore and our culture and this is why giants encounters or trobades are organized in Mallorca,as the one held last  Saturday April 27th in Sineu or this Saturday May 4th  in Santa Maria.

At the giants encounter last Saturday in Sineu, the hosts Maria Angeles and Marc welcomed their guests and staged a colorful parade through the streets of the town.

If you could not attend to the giangts encounter in Sineu from Mallorca Private Tour Guides, we encourage you to not miss the giants encounter next Saturday in Santa Maria.

Knowing our folklore and traditions is part of our culture, and if the Giants during their history have gone through so many obstacles and still been able to reach this days, we believe that they deserve our support and respect.

Join  Mallorca Private Tour Guides and do not miss the giants encounter in Santa María next Saturday.

Let us guide you through our culture and folklore and discover with the guides of Mallorca  Private Tour Guides, the Mallorcan folklore, let yourself be enthralled by the beauty of our people, by the joyful sound of the music of the xirimies (Mallorcan bagpipe) and the greatness of our giants,their elaborate garments and crafts and traditions that they represent.

With Mallorca  Private Tour Guides discover Mallorcan giants and its origins, sure you’ve seen them many times participating in our celebrations and parades through our streets, but we are sure  you were not unaware of its history, come and discover them with us.

PD. Soon we will present them through a photo blog so that you can discover something from each of them. Do not miss it ….. 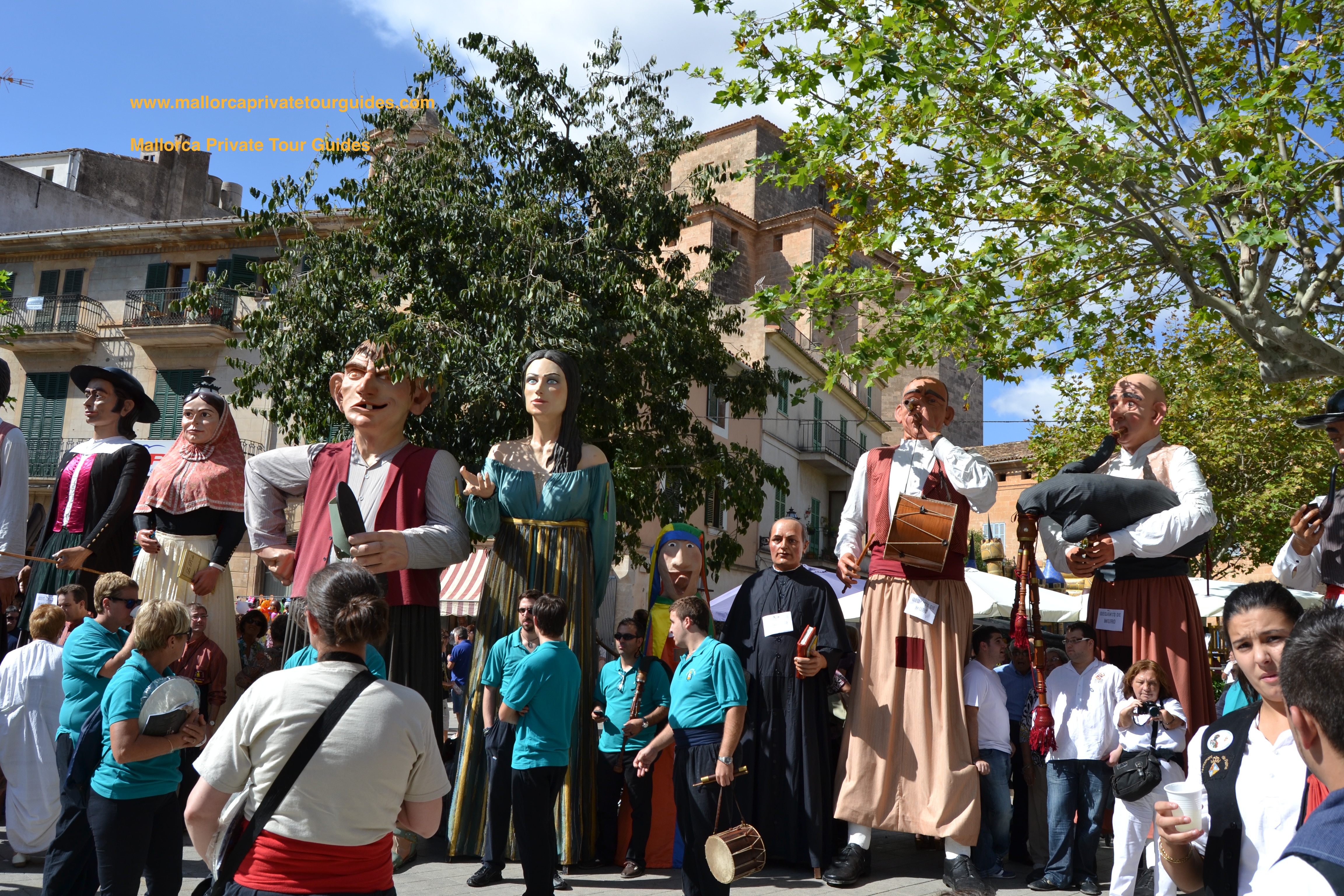