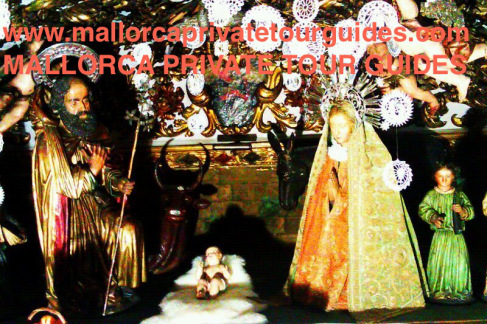 Surely many of us don´t know that Mallorca in proportion is the place in Spain where a larger amount of  traditional nativity scenes are preserved, prabably many of you will be surprised to discover that the oldest nativity scene in Spain, is here in Mallorca in Palma at La Sang church (where is venerated the famous Cristo de La Sangre)popularly known by the name Jesus nativity scene.

A nativity scene which will arrived to Mallorca in 1536 but it´s  assumed that is older tan this,because it´s a Neapolitan nativity scene attributed to Alammano workshop, whose carvers got Nordic origin and worked in Naples between 1460 and 1480.

But even its arrival to Mallorca it´s wrapped in a mystery, as there is a belief that the nativity scene came in a boat on a dark stormy night.

It´s said that the captain of this ship called Domingo Gangome or Janceme, between  ship´s load was carrying on board 7 Neapolitan nativity scenes.

The ship was engulfed into a huge storm and shrouded in darkness, they saw no way out, so the captain promised that if there was a light to guide him in gratitude would give one of these nativity scenes, and the light came,it was the light of the Franciscan convent of Our Lady of the Angels in Mallorca “Nuestra señora de los Angeles”, this convent because it was located  outside of  the city walls, had its light on all night.

And this was the miraculous light that helped the ship,the captain  Gangome or Janceme  in gratitude, gave the nativity scene choosed by the Franciscan Prior in between the seven nativity scenes he was carring on board, a left it in Palma into the franciscan convent of Our lady of Angels” Nuestra señora de los Angeles” and this is the way how the oldest nativity scene in Spain arrived to Mallorca, it is not awesome?

This legend is shown in a painting which can be seen in the chapel  into La Sang church,next to the nativity scene.

When the convent of Our Lady of the Angels “Nuestra Señora de los Angeles” was disentailed by the law of Mendizabal (secularize) in 1835, the nativity scene was changed into its current location, the  Annunciation church in Palma, which honors the famous Christ of the Blood “ Cristo de la Sangre”.

The nativity was installed into the first chapel on the right (it´s usual in Franciscan convents, in the same location can be found the nativity scene in San Buenaventura convent in Llucmajor) as it was exposed earlier in the convent of Our Lady of the Angels “Nuestra Señora de los Angeles”.

The nativity scene figures are wood carvings, Sint Joseph measures 1.42 meters (4,65feets)  and 1.18 meters ( 3,87 feets) the Virgin, both are accompained by six musician angels with their instruments and an average height of 80 cm (2,62 feets),and can not be missing the ox and the mule.

In front of the cave 3 shepherds with their sheeps, white and black and two big black dogs.

Another curiosity, after Jesus birth on Christmas Eve, the Virgin is dressed with beautiful garments, as she has become the king’s mother.

And another peculiarity and this a majorcan tradition, in Mallorca Jesus child on Christmas Eve is  placed on the crib,and new year the sit him in a majorcan chair “trona” as a sign that being only 2 weeks old, he can walk.

Surely many of you,have been surprised by this amazing story, but this one and many more are the ones that you will enjoyed on a guided tour with Mallorca private tour guides, come an join us into our amazing Christmas tours….

Mallorca Private tour guides offers you guided tours where you will discover the most rooted Christmas traditions in Mallorca, traditional nativity scenes and much more that our guides will show you during the visit…you can not miss it

Let us be your tour guide and discover with Mallorca Private Tour guides the oldest nativity scene Spain, La Sang Nativity scene in Palma de Mallorca … hope to see you soon in one of our guided tours

Happy holidays to all of you and all the best for the new year….Mallorca Private Tour guides Team