Currently, on the island, traditional demons and the majorcan demons of fire are participating in the Sint Anthony festivities celebrated in Mallorca on January 17th, this is the feast par excellence in Mallorca where are presente for sure, these characters “dimonis” are part of our popular culture.

As tradition on the island, Demons  “dimonis” are representing each village and in some cases this tradition is held over hundreds of years, in fact, some of the costume masks are preserved for over one hundred years, while other villages they have their own demon just for a few years ago. There are villages in which the demon has changed its name over the years, and on the other hand there are places where the tradition has remained intact. There are also people who have adapted their demons to modern times, there are demons of all kinds, small, giant, angry, funny, scary, or mischievous, dancing and persecuting the people join the party. The first representations of demons are documented in Mallorca at the end of the fifteenth century in the processions of Corpus Christi, and in the seventeenth century integrated on the ritual dances of the cossiers (dancers) and the late eighteenth century participated in the festivities of Saint Antonhy  (one of the main celebrations in Mallorca). 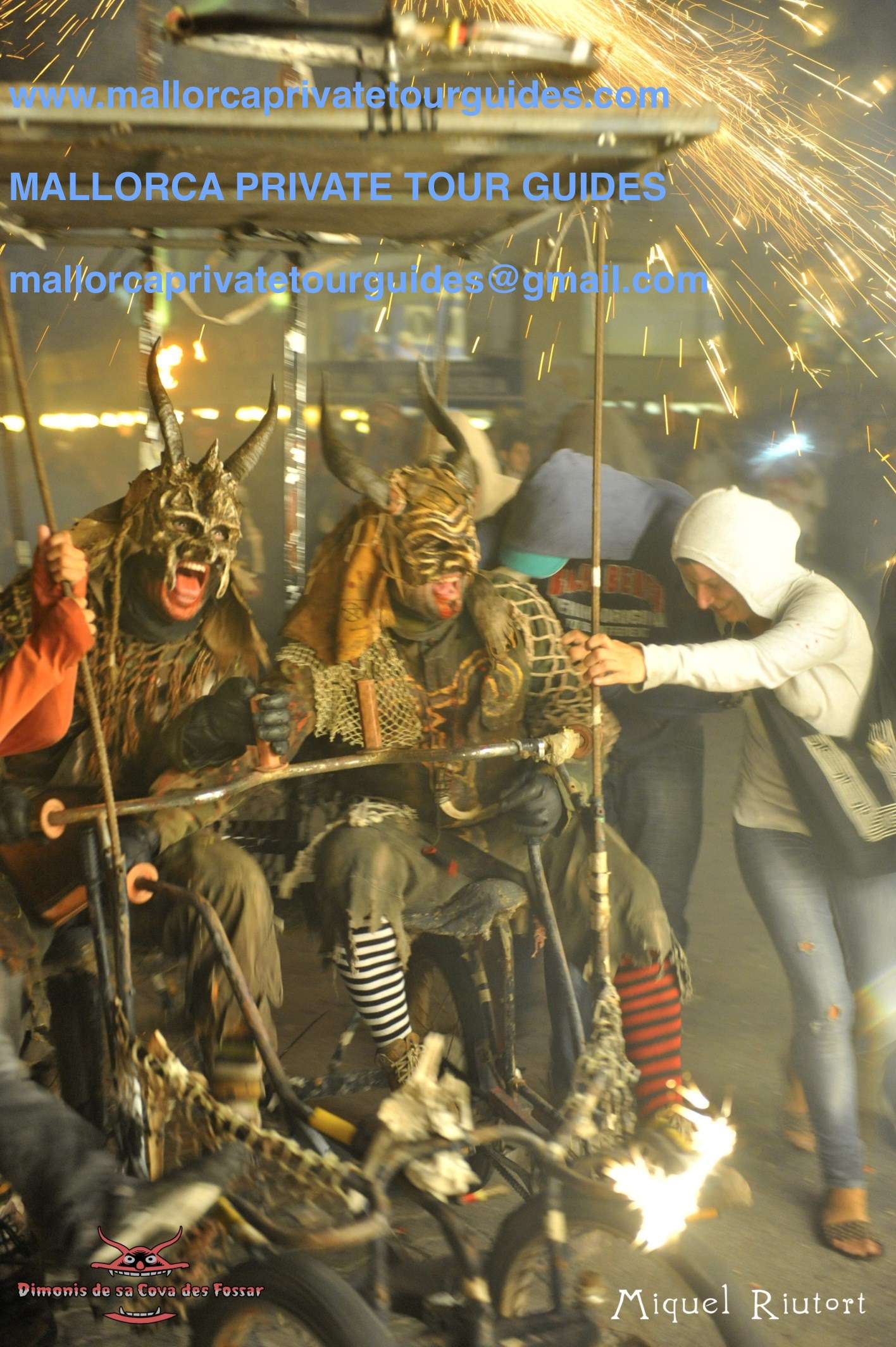 The fire demons are involved in  the correfocs (typical majorcan celebrations based in fire games). The correfocs have become in the last twenty years in a very representative part of the celebrations of many villages in Mallorca, since many new groups have been formed and still are continuing to appear. Each group of demons has a dress and masks that identifies and usually each group consists of thirty demons. Usually accompanied by the music performed by a group  called “batucada” (drums and percusion instruments) and many of this groups have their own Fire beast ( usually mythological animals blowing fire).

One of the highlights of the majorcan correfocs is the noise of fireworks around people, the way that the public dance without fear under a shower of sparks and fire,people hugging the demons, demons try to make people to be involved into the party and to have an active participation, resulting in a very colorful spectacle. At these parties shown an atmosphere of joy that lives together with fear, happiness coexisting with danger, a dizzying pace of dance mixed with caution needed because of the fire present at every moment. It shows a respect and sensuality, a brazenness and a daring permanently walking in the bold line between good and evil demon. 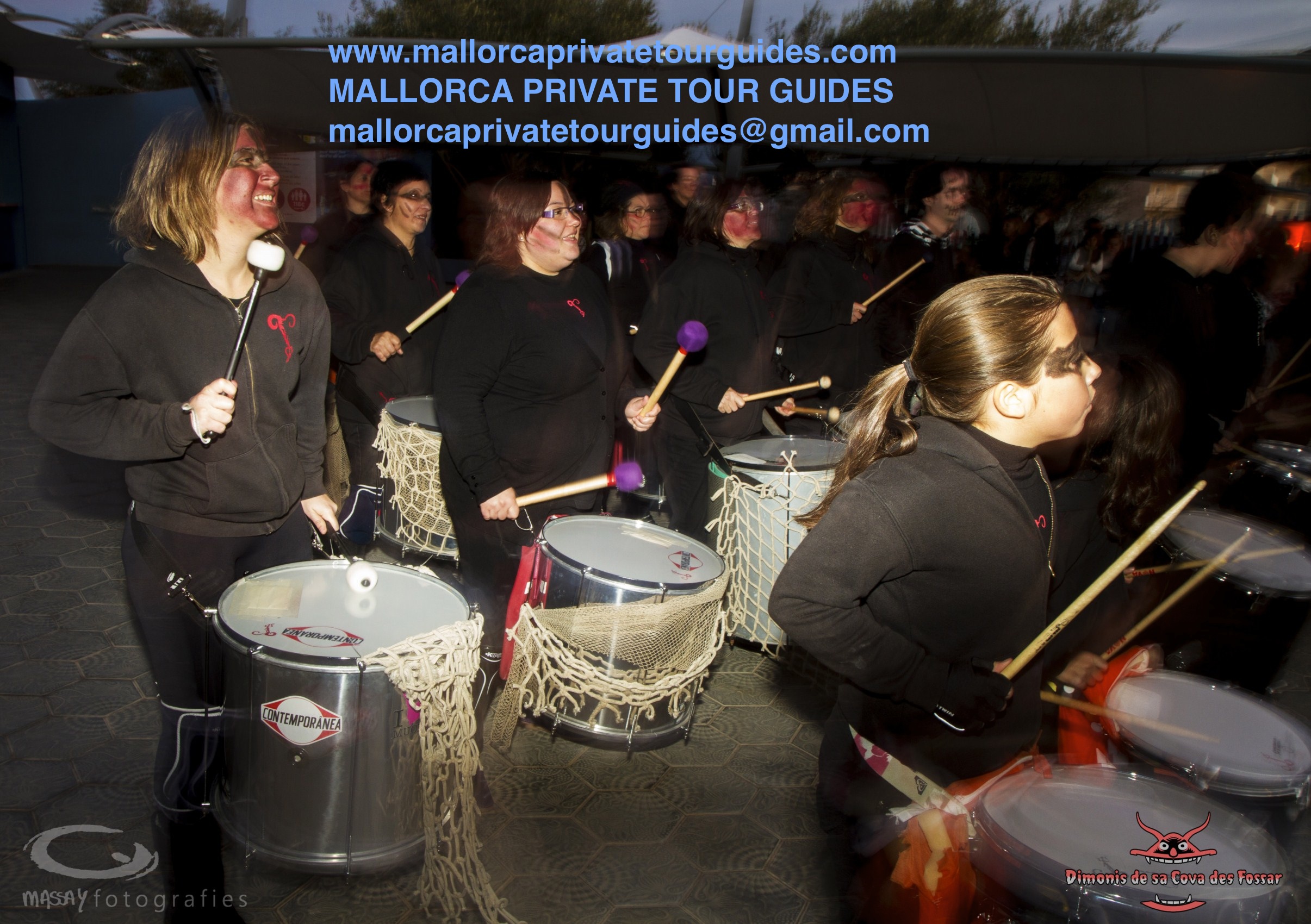 The presence of devils in Saint Anthony festivities is explained by two different ways, corresponding to the double symbolism of the character in the party. The devil, as the initial concept of evil, appears in the culture starting from man’s need to explain the adversities and the negative circumstances of the natural environment: floods, winds, earthquakes or fires.

The acidental facts, sudden deaths, the misfortunes are attributed to the existence of a negative power that becomes, according to the beliefs of each one into a God or an evil opposed to divinity. More than just good or bad in a narrow sense, these beings can be defined as hazardous. These beings-forces of nature are assimilated by Christianity with demons,rebel angels banished to hell, agents of evil

However, this Identification is not achieved, definitely. Centuries later, are still in our popular tradition, especially at parties, a number of devils who represents genius of nature and nothing to see with the evil Christian demon, which, on the other hand, would have been dangerous socially to be celebrated.

Saint Anthony is the saint par excellence representing the triumph of Christianity over the pagan gods assimilated to ancient demon. Hence the joining of these characters in the festivities of Saint Anthony. The symbolic elements of the party are:

Bonfires or Foguerons: Part of primitive rituals of sun worship. Demons jumping, performing pirouettes over fire and dance around such primitive shamans and sorcerers. The fire represents the victory of light over darkness.

Demons: They are far away reminiscences of the ancient shamans and warlocks around the fire,making rituals directed in favor of fertility of the tribe to which they belonged, to ensure their survival, and in favor of the good harvests. A very primitive ritual component is the fact of jumping over fire, it was believed that this act was entailed to achieve the magical fertility. 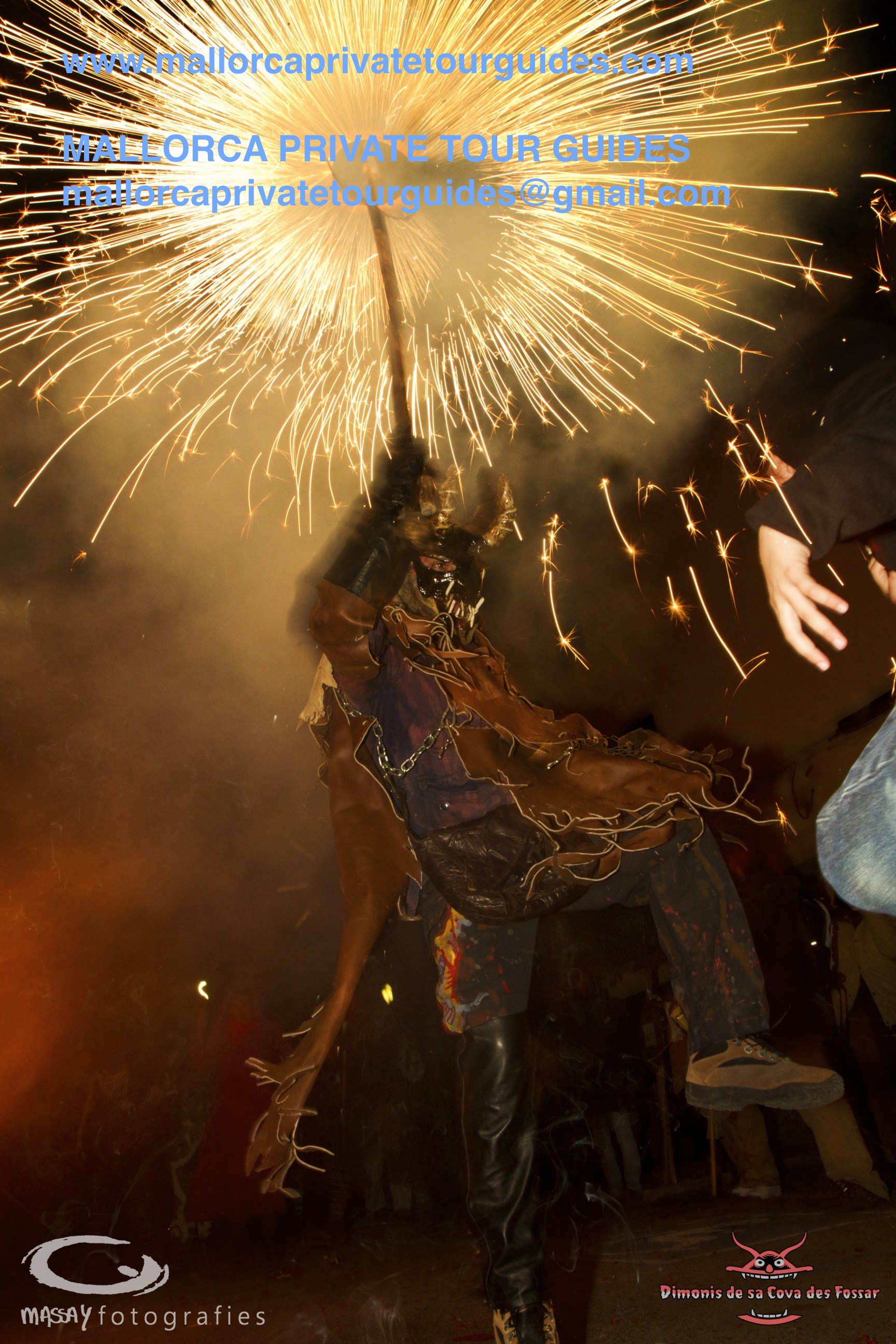 It is for this reason that Mallorca Private Tour Guides wants to inviteall of you to come on Saturday 15Th June to Sineu, where, from 11 noon to midnight, will be held the First Meeting of Demons, Devils and Beasts of Fire into  Balearic Islands, organized by the Federation of Demons, Devils and Beasts of Fire and you can attend  to a huge variety s of activities such as races, workshops, exhibition of fireworks, parades with bestiaries and batucadas and finally, the correfoc performed by the “Dimonis  Sa Cova des Fossar”, this group or «Colla» will the host of this event.

This group of demonds was born in October 2007 by people interested to preserve majorcan culture and with the support of the City Council, and is currently constituted as a nonprofit cultural association, and it has aproximatly 140 members, including adult demons, children demons, members of the batucada and partners.

«Els Sonats» batucada have also emerged from the same group,Sa Cova des Fossar, and during this last year has been looking for sounds and rhythms to complement the show, achieving a high level of fusion between fire, sound and game.

Mallorca Private Tour Guides would like to thank to Colla de Dimonis Sa Cova des Fossar, for letting us to use these great pictures showing part of this show, and whose authors Macia Puigros and Miquel Riutort are part of  Filtre Cremat photographic group, which also have exposed part of their photographic work related to this topic in Sa Plaça de S’Era in Sineu, we invite all of you not to miss this great photographic exhibition.

Here you have the event program for Saturday 15th june in Sineu:

-11.00 am Inauguration of the First Meeting of the FDBIB (demons, devils and beasts of fire into the Balearic Islands) and opening of the fair (merchandising and advertising stalls of the various federated groups participaiting on the encounter).

– 11.30 am Start of the demons children race, you will see the smallest members of the demons dressed with the costumes of their groups, fighting for victory.

– 12.00 am adults demons race. The demons of different groups will try to reach the finish line alive after running with the dress of your group.

– 12.00 am. Storytelling workshop for kids: Maligneta, the demon girl which wanted to return her horns( made by the demons of Cova des Fossar).

– Workshops, to be organized at different times of the evening:

Body language: 2for adults (by Pau Bucherer) and for children (by Catherine Nephew).

Fire blowing Workshop: for adults by Xisco Rubi Pol, a great demon, member of the group of the Phylloxera of Hell

From Mallorca Private Tour Guides we  invite you all to attend this event in Sineu, the first meeting of demons, devils and beasts of fire, which promises to be interesting.

Folklore is an important part of the Majorcan culture, and  demons tradition is rooted in our island, come to Sineu and enjoy the correfocs, the fire show,fireworks and music and of course one of emblematic villages of the Island, Sineu

Hope to see all of you in the first demons ,devil and fire beasts encounter in Sineu 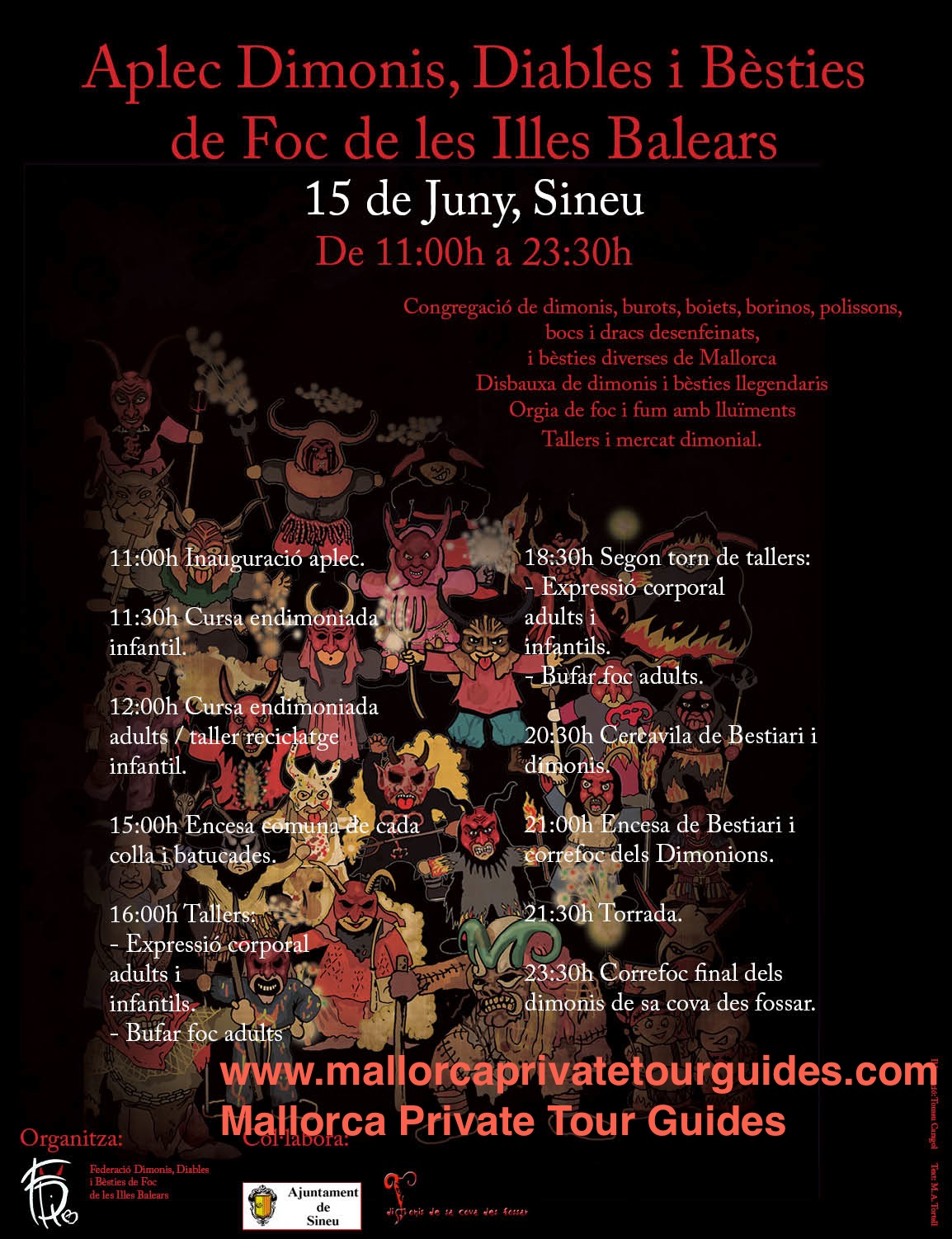